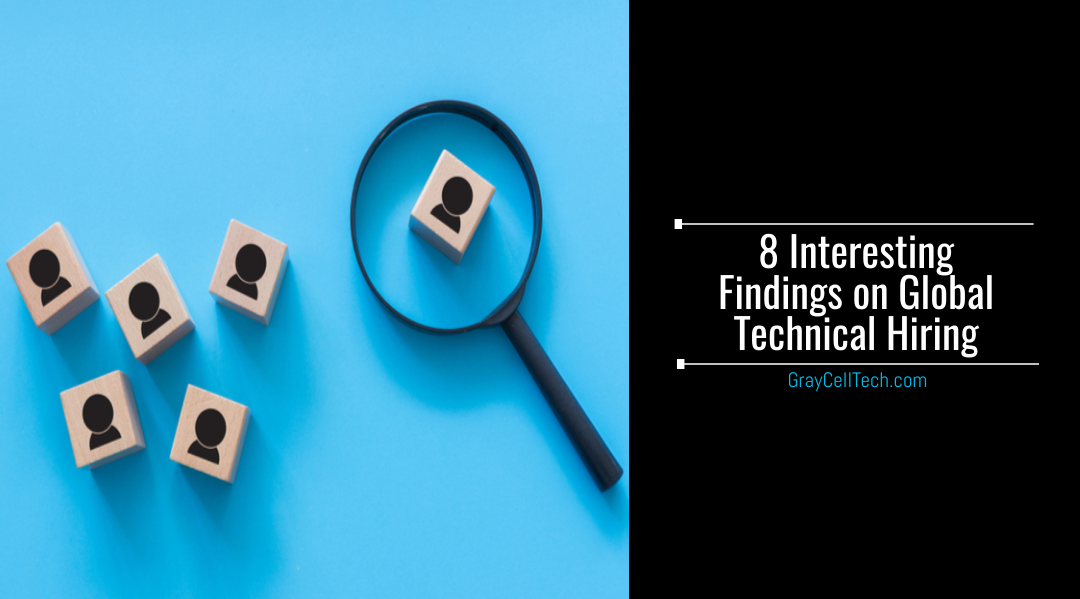 DevSkiller created another edition of the global technical hiring report, having analyzed over 213,000 coding tests sent to developers from 143 countries. What does this mean? Well, long story short, it contains the most unique data, which is inaccessible anywhere else. While the entire 2020 IT skills report is worth reading and bookmarking, we’ve decided to highlight eight very interesting insights coming straight from the report.

Read on to find out more!

1. Devs are tested the most in JavaScript

Should it come as a surprise? Not really, if you compare it to the report from 2019, where Java held the first place. In the current edition, it turned out that JavaScript is now the most popular language that devs are tested in. The top 5 languages tested on Devskiller (based on test invites) are, in descending order, JavaScript (40%), SQL (33%), Java (31%), HTML/CSS (20%) and .NET/C# (12%).

Frankly speaking, though, many JavaScript coding tests may include Java or SQL knowledge as well.

What is also interesting about JavaScript? Put together with CSS, it is the most tested combination of languages (over 20%). The second most popular choice is JavaScript+HTML, with almost 18% of all tests. The JavaScript+SQL cluster with 13.8% of tests shows a strong correlation between front-end JavaScript and server-side tech stack like SQL.

2. React is the #1 resource in the JavaScript stack

What is the most popular technology in a JavaScript tech stack? It turns out that over 33% of JavaScript developers are, or will be, tested on React, with ES6 coming in second place with 27%. Angular2+ comes third by appearing in 14% of tests.

3. It takes just over 2 days for a candidate to take a coding test

One of the most interesting findings is the average wait time between receiving a test invite and completing it. The time visibly decreased, compared with the previous edition of the report – it was nearly 3 days last year, whereas now the time taken is down to 2.27 days. This is a very valuable piece of information for recruiters – developers are getting more serious about the recruitment process and they tend to take the coding tests faster. They seem to see their chance for a smooth collaboration in the quick completion of the coding test.

4.When to send the invite for a coding test to get the fastest response?

The answer is simple: on Wednesday, at least according to our report. The data points to Wednesday as the day when the average wait time in hours (based on the day of the week the invite is sent) is the shortest: 41.24 hours. This comes as a bit of a surprise since the previous edition of the report recognized Wednesday as the worst day for sending out invites: it took over 3.2 days for a candidate to react to it, so the response was rather slow. It is another proof of candidates taking the process seriously and contributing to optimized recruitment processes.

Of course, it does not mean that you, as a recruiter, cannot send an invite on any other day. However, there are some conclusions to test out.

Only six per cent of candidate reports are anonymized. Non-anonymized candidate reports can disturb the objective evaluation of a particular candidate’s skill set since they include personal details. These details can often become a factor when deciding on giving someone a role or not due to unconscious bias. Recruiters should have no excuses for such details since there are tools offering features for anonymizing. That said, only 6% of the reports generated on the platform were anonymized.

6. Who scores the highest on coding tests?

Latvia for the win! Latvian developers score on average a whopping 54.65% on coding tests, overtaking the Netherlands by two percent. Italy, Romania, and the Dominican Republic take the third, fourth, and fifth place respectively.

7. Israeli companies take into consideration only 12% of the developers they test

In terms of the percentage of candidates accepted by the recruiters, according to the country where it is based, Israel turns out to be the most selective with no more than 12% of those tested being selected. There are three more countries who select less than 20% of the developers they test: Luxembourg, Malaysia, and Singapore. Being selective is not necessarily a bad thing: tests are thoroughly targeted and can reach more candidates. Therefore, companies may have more choice, but they can also be more selective since they are looking for a particular skill set.

8. 93% of developers globally finished the coding test sent to them during the recruitment process

As it turns out, developers face no problem in completing coding tests when faced with the right type of test, namely in-stack tests. Some countries definitely standing out by having more than a 97% completion rate of tests. This involves candidates from Ecuador, Bulgaria, Azerbaijan, Ghana, Kazakhstan, Uganda, Jordan, Hungary, Bosnia and Herzegovina, Latvia, The Netherlands, Ireland, Belarus, and North Macedonia. There is one main reason why the completion percentage is so high: developers simply trust professional in-stack coding tests and treat it as an investment of their time, not a waste.

If you want to know more about global technical hiring, then you should definitely familiarize yourself with the newest report from DevSkiller, including way more insights than just the ones covered here.