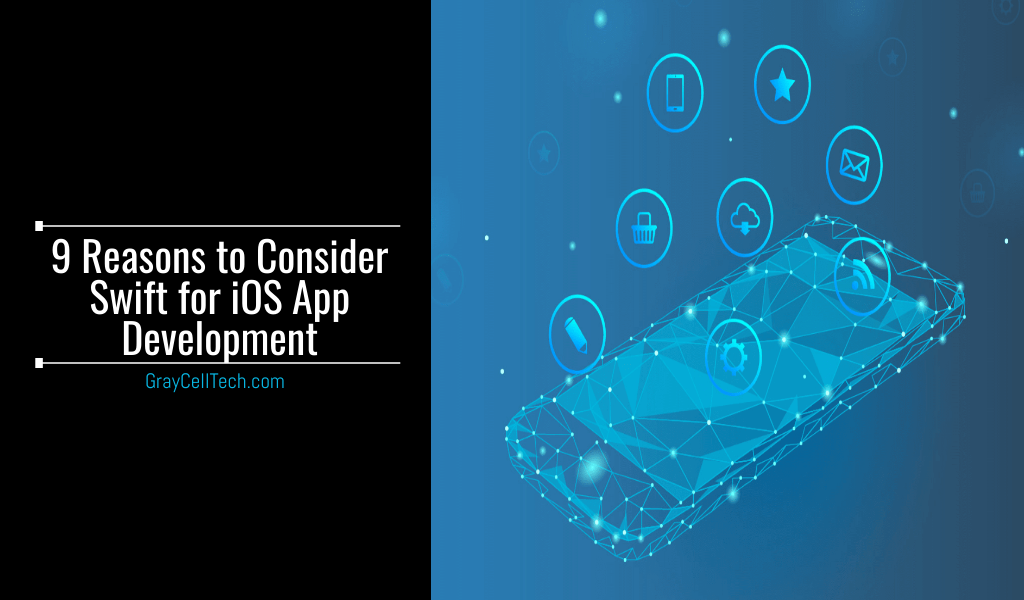 Swift is an object-oriented programming language introduced by Apple. It is built using an open-source LLVM compiler framework and used for iOS, Linux, macOS, iPadOS, watchOS, tvOS, and z/OS app development. It utilizes the run-time library of Objective-C that allows C, Objective-C, C++, and Swift code to run within one program smoothly.

Earlier, Objective-C was considered for OSX and iOS app development. Swift was introduced in 2014 and still became popular among iOS developers.

As Swift syntax is brief and powerful, iOS developers find coding on Swift fun and interactive. Developers also love this intuitive language because of its modern features. Swift coding is safe and runs swiftly with lightning-fast speed. It utilizes C as well as Objective-C without having direct built-in C compatibility and leaving the limitations that come along with it. Using the Cocoa and Cocoa Touch libraries, Swift redefines the understanding of app development on all iOS platforms. Thus, developers believe Swift is better than any other iOS development platform.

Let’s take a look at the following benefits of Swift programming language due to which it became popular among software development companies for creating iOS apps.

App development utilizes programming languages that require high and complex command lines for complex solutions. However, Swift is concise. It can minimize the line of code that makes programming faster and more efficient. Code reusability is also high since complex tasks require fewer lines of code. Developers know to use a piece of code without changing its part, or even the project. As a consequence, a lot of time gets saved.

Developers prefer Swift for iOS app development because Objective-C (formerly utilized in iOS development) was dependent on C. But, this is not in the case of Swift. Therefore, Swift is easy to maintain due to which iOS developers love this programming language.

While using C and Objective-C, developers require two code files to increase code efficiency and build time. Whereas, Swift combines these two files into a single code file – .swift that makes Swift easy to manage. Due to this, iOS developers working with Swift spend more time in planning the app logic and enhance the quality of their code to make the iOS app run effortlessly.

Entrepreneurs require a safe and secure app. So, mobile app development companies prefer Swift to create a safe and stable mobile app for their clients. Swift utilizes easy to understand syntax that eliminates the chances of mistakes that generally gets overlooked in Objective-C.

Swift language is the most stable language for mobile app development as it has fewer crashes and cases of problematic behavior in comparison to other languages. Using Swift, developers are less likely to make mistakes in writing the code; therefore, it adds another layer of quality check for the iOS app. Thus, Swift is a language that is safe, secure, and stable to work.

Swift language utilizes clear syntax and does not use legacy conventions such as semicolon and brackets; thus, it requires less coding. This language is less prone to errors due to its inline support for manipulating text strings and data.

In Swift, there is no need to divide classes into two parts – the interface and the implementation. It reduces the number of files into half, and these files are easy to handle. When developers work with Objective-C, they require to combine two strings that make the code lengthy. On the contrary, when developers work with Swift, they can use the “+” sign to combine the two strings. It reduces the code as well as the developer’s efforts.

Whether it is the development phase or the testing phase, the high-speed feature has made Swift popular among iOS developers. Due to this advantage, the cost of app development reduces. Apps developed in Swift are approximately 3.9 times faster than the implementation of the same algorithm in Python.

Swift utilizes a single code, whereas Objective-C utilizes two code files, which is why Swift is faster than Objective-C.

Developers consider Swift and C++ as the two fastest app development language, i.e., they consider both languages equal in terms of their performance. Apple introduced Swift in the market to improve the speed or run the app logic much faster.

Another reason why swift is popular in comparison to Objective-C is that it supports dynamic libraries that make it easy to work. Such libraries are an archive of object files linked to an app during the runtime or the load-time. This feature enables apps that are currently built on a specific version and can be updated to the future releases of Swift easily. Dynamic libraries reduce the initial app size as they can be directly uploaded to the memory and consequently increase the performance of an application.

Swift became more popular in 2015 when Apple announced it an open-source language. Open-source saves the development cost of iOS apps, which is an added advantage for small scale as well as large scale businesses.

Swift can work in an interactive environment; developers can see the output while coding. It indicates that coding errors can be identified and rectified in the coding stage. In case you are coding any loops, you can view it in the timeline panel where variables get calculated.

The playground feature allows coders to test a new algorithm without creating an entire app. iOS executes inline code so that coders can develop code or algorithm while gathering feedback along the way.

Feedback improves the speed at which code can be written using data visualizations. With Playground and Swift, Apple made an effort to make the development process easier and more approachable for any app development company.

Are you an entrepreneur who wants to develop an iOS app for your business but confused about which is the right language for your app development? Whether to choose Swift or Objective-C language mainly depends on the type of app that you want.

Although Swift components are used from Objective-C, Swift also brings an entirely new host of features that enables developers to write code that is more safe and reliable. The Swift syntax is clear, easy to understand, and less prone to errors. A lot of new improvements have been made with the latest updates in the Swift language. With the latest Swift version comes new opportunities for developers that help them create more accessible, engaging, and user-friendly apps for the successful growth of your business.