Flutter vs. React Native vs. Xamarin – Which One Is The Best For You 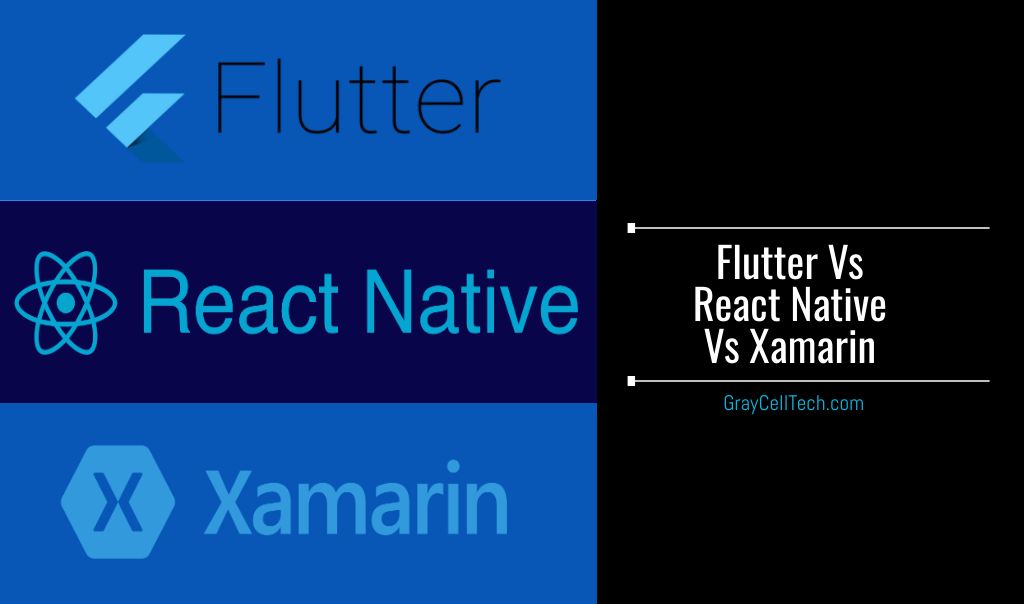 In this post, we’ll talk about the three cross-platform mobile app frameworks – Flutter, React Native, and Xamarin and how they are different from each other.

Flutter is an open-source framework developed by Google in 2017. This tool garnered a substantial amount of attention in less time; it is now among the most popular frameworks for front-end development. Google AdWords and Alibaba are two popular apps that utilize the Flutter platform.

React Native is also an open-source platform that was developed by Facebook in 2015. It can build mobile apps utilizing JavaScript and React along with native platform capabilities. Apps such as Facebook and Instagram rely on the React Native framework.

Xamarin is another open-source tool that was founded in 2011. The World Bank and Skulls of the Shotgun are the two popular Xamarin-based apps.

Which one is better – Flutter, React Native, or Xamarin?

“Want to create a mobile app?”

“Don’t know which framework to use – Flutter, React Native, or Xamarin?”

Don’t worry!! We will help in clearing your doubt. Consider the following factors to know the answer:

A mobile app must be quick and responsive. Therefore, performance is the prime concern for app developers. Flutter shows excellent performance; since it utilizes Dart code (similar to native code), the speed of interactions increases, which increases the performance.

The other two platforms (React Native and Xamarin) are slightly slower than Flutter. There are plenty of factors (such as functions and features) that influence the performance of the mobile app.

Security is another essential factor considered by cross-platform developers to build their app as the security of both the app and the source code is mandatory. React Native supports third-party plugins. However, it does not support robust security. On the contrary, apps based on Flutter and Xamarin are robust and compatible with security access.

Related Article: Why Use Xamarin for Mobile App Development?

Since React Native allows third-party plugins, customization using this framework is easy and compatible with Flux. Whereas, both Flutter and Xamarin utilize Hot Reload and Live Reload features respectively to empower live changes in the ongoing development. They have pre-installed layout elements, which means they offer freedom of customization.

It is built to offer support and finds out issues related to the framework. Xamarin has limited community support, while React Native and Flutter have better community support that solves issues (if any) and makes it better for users. According to the GitHub, React Native has higher ratings and more followers than Flutter. It indicates that React Native is the winner.

React Native is the most popular cross-platform mobile app development framework used across the world, followed by Flutter and Xamarin, respectively.

Related Article: Native (Android or iOS) vs React Native: Which One to Choose?

In July 2020, a survey done by Statista revealed that 42% of developers use React Native, 39% use Flutter, and 26% use Xamarin for mobile app development.”

All the above mentioned cross-platform frameworks have their pros and cons. Thus, it is difficult to conclude the best tool for app development. However, if you want to craft your mobile app in minimum time, you can choose Flutter over the other two frameworks. In case you want to reuse the source code, you can build your mobile app using Xamarin because this tool allows developers to reuse 96% of the code, which is higher than the other two tools. Also, Xamarin based apps are similar to native apps. Moreover, if you want to build your mobile app that is simple and has good community support, then the React Native framework is highly recommended.

You can choose any cross-platform based on your business requirements. In case you are still confused, then you can hire a virtual app development company that will help you to develop your mobile app.

If you are willing to hire an outsourcing team for your project, consider GrayCell Technologies, an app development company located in Chandigarh, India, that will help you to address your business requirements and provide the best-suited solution for better ROI.