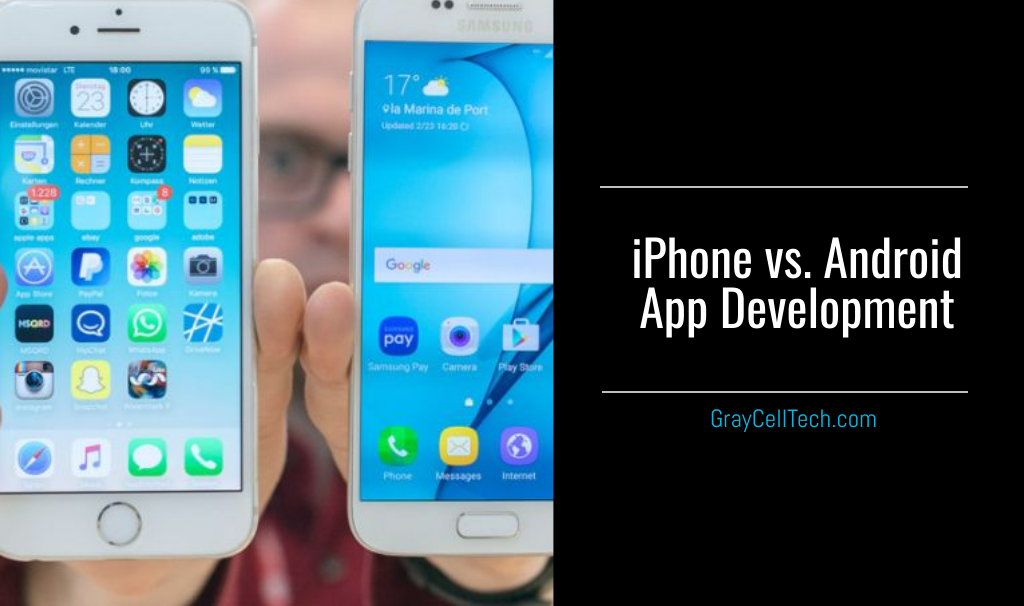 In this era of technology, mobile phones have a great impact on society as well as in the world. According to Statista, there will be around 6 billion global mobile phone users by the end of 2019 and expected to surpass 7 billion by 2021. Due to the surging demand for mobiles, mobile app development plays a central role in creating brand affinity for businesses. Android and iOS are two major platforms for mobile apps to operate. It’s tricky to choose between android and iOS development as both are good in different aspects. This post will compare Android and iOS development to opt for the right technology for your business by realizing and assessing the potential benefits offered.


Difference Between iOS And Android Development

Successful app development brings increased recognition and customer loyalty to a company. Moreover, it serves as a great tool for better customer engagement, improves visibility, and widens the market share of a business. The important question here is- which development platform will serve well the business objectives? To know the answer, one should be able to differentiate android and ios development in various aspects. Let’s dig deeper to compare android and ios development to help you to get a clear idea about which one to choose.

Before starting any project, one needs to think about the target audience. In terms of iOS vs android demand, there are around 1.4 billion active iPhone devices and 2.5 billion android devices as per the available data.

According to the Business of Apps, around 2.6 million Android apps, and 2.2 million iOS apps were available to download in the first quarter of 2019. Till now, there are about 76 billion Google Play downloads and 30 billion iOS App Store downloads.

The market share plays an important role in choosing a mobile development platform. As of October 2019, the global market share of android is around 76.7% and iOS is 22.1% according to Statcounter. Apple is the only manufacturer of iOS devices whereas there are thousands of small to large companies that make Android devices. Because of competition, android devices are cheaper so possess a lion’s share in the global market.

Even though the number of android users and apps are more than iOS users and apps, Apple generates more revenue. The reason is quite obvious that Apple users are ready to spend more on app purchases than Android users. According to the Business of Apps, iOS App Store revenue was $46.6 billion as compared to Google Play revenue merely $24.8 billion in 2018.

It is difficult to estimate iOS vs android development costs. Because not only the time but also the hardware used for the process contribute to cost. Android development takes more time which adds to cost. On the other hand, iOS app development is done with Xcode that works only on Mac. So, the investment in buying a Mac as well as an iPhone or iPad adds to the iOS development cost. In short, the development costs for both platforms will depend on the desired app’s features and complexity.

The language requirements for iPhone vs android app development are completely different. Android apps are mainly developed in Java and Kotlin whereas iOS apps require Objective-C or Swift for Native development.

Publishing Android apps in the Play Store is quite easy, less time-consuming, and affordable. It takes a few hours for an app to go live after publishing. Even, the updates are quick and easy.
iOS apps have a lengthy and strict approval process for publishing as testing and validation is done before approving apps to publish. This process can take days.

Android Emulator is an excellent testing environment including all the testing tools to test apps thoroughly before publishing. It is more effective and realistic than Apple’s Xcode testing platform.

Both the mobile app platforms have advantages as well as disadvantages. Let’s have a look on the go.

iPhone vs. Android Development: Which platform should you choose?

In light of the aforementioned points, one should go for iOS app development if already has iOS hardware and wants to generate more revenue per user by following a less complicated development process. On the other hand, go for Android if you want to target the wider audience in developing countries with lesser wait time to market and easy app customization. Ultimately, the choice of the mobile app development platform depends entirely on company requirements, budget, and time to market. GrayCell Technologies can help you to assess your needs and also offers Android and iOS services for an elegant online presence.