Native (Android or iOS) vs React Native: Which One to Choose? 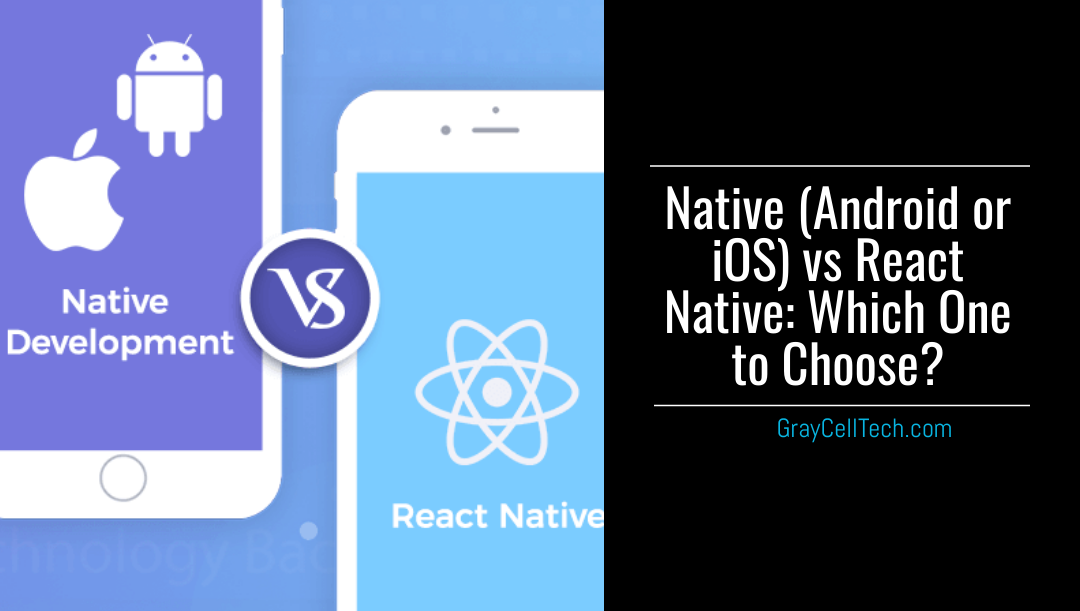 The ease of using the internet on mobiles has skyrocketed its demand worldwide. Surprisingly, mobile phones cater to 70% of the total internet traffic. Consequently, the number of mobile apps available in the market has also been increased.

According to Statista, there will be more than 5 billion mobile phone users worldwide in 2019. It has created strong competition among mobile app development companies. Though all are struggling to find the answer to the same question- which app development platform should be used to stand out of the crowd. The major platforms for mobile app development are React Native, Android native, or iOS native. Let’s analyze what these mobile app platforms are, how they differ from each other, what are their advantages and disadvantages, and where to use which platform in detail.

What is React Native?

A native app is a software program that runs on a particular device or operating system. Android and iOS are two such mobile platforms that are more popular than others these days. Native Android apps are developed in Android Studio with Java and Kotlin languages. Whereas Native iOS apps are built in XCode IDE with Swift and Objective C languages.

Let’s have a look at the difference between both the mobile app development approaches before making a decision about the platform that will serve your purpose better.

React Native framework uses platform-specific UI controls for native rendering. It also consists of a JS bridge that executes the JS runtime and connects the app with its native parts.

This architecture has 5 layers- View,  Interactor, Presenter, Entity, and Router. Using a mix of different architectures is also a common practice in native app development.

Each platform has its approaches for navigating through UX. For example- Android has three buttons whereas iOS has a single home button.

Similarly, React Native can implement numerous navigation patterns. It has two default modules – NavigatorIOS (for iOS only) and Navigator(for both-Android and iOS). Though, provides many JS-based and native implementation modules other than default as well.

Native apps do not include any additional runtime or other adjoined elements so have considerably small bundle size.

In the case of React Native, the package includes JS runtime and native components that increase the app size by few MB.

React Native uses JSX that allows embedding XML to JS. For instance, the button rendered in React Native looks and even functions similar to the buttons in the native app development i.e Android button or iOS button. The only difference is the language in which it is coded.

React Native is used in developing cross-platform apps for Android as well as iOS. It has a number of advantages but a few disadvantages also as follows:

There is no need to write different code for different platforms such as Android and iOS. React Native has the same codebase for developing native Android as well as iOS apps. It saves the developer efforts to learn two separate platforms or languages as React Native will serve the purpose.

Being open-source, React Native has a library compatible with many platforms like TvOS, Windows and gives the benefit of inspecting the code.

React Native makes the transition from web to mobile development effortless for developers. This is because they are quite familiar with the Javascript.

While developing in React Native, all the saved changes get reflected on the running app. This speeds up the feedback process.

React Native does not support all native APIs but only the most used ones. The rest of the APIs can be accessed via native modules.

Native modules incorporate the additional functionality into the React Native code that otherwise not included in it. But, it requires the knowledge of the native language that will be a burden for the developer as chosen the React Native to avoid the same. Secondly, the problem of code duplication arises with the use of native elements.

React Native does not provide access to native applications and it is quite easier with native frameworks.

Which One is Better?

When it comes to choosing one mobile app development platform, there is no clear trend. The choice is hard as merely depends upon the features, one requires in the app. If one wants to develop a simple app in less time and a smaller budget, React Native is a good choice. Similarly, from the aspect of future maintenance, React Native is preferable.

But if you want to build an app with complex functionality, the native will be a better option. Because if you go for React Native for such an application, you still need a sound knowledge of the native platform to enable the native APIs/ elements. So, native app development is better in such cases.

On the whole, it can be said that it is only a matter of choice that which platform you would opt for mobile app development. Both can give good results depending on the desired features and available resources. Get in touch with GrayCell Technologies, if you want to avoid all the hassle involved in the development of well-designed, cost-effective, and eye-catching mobile apps.