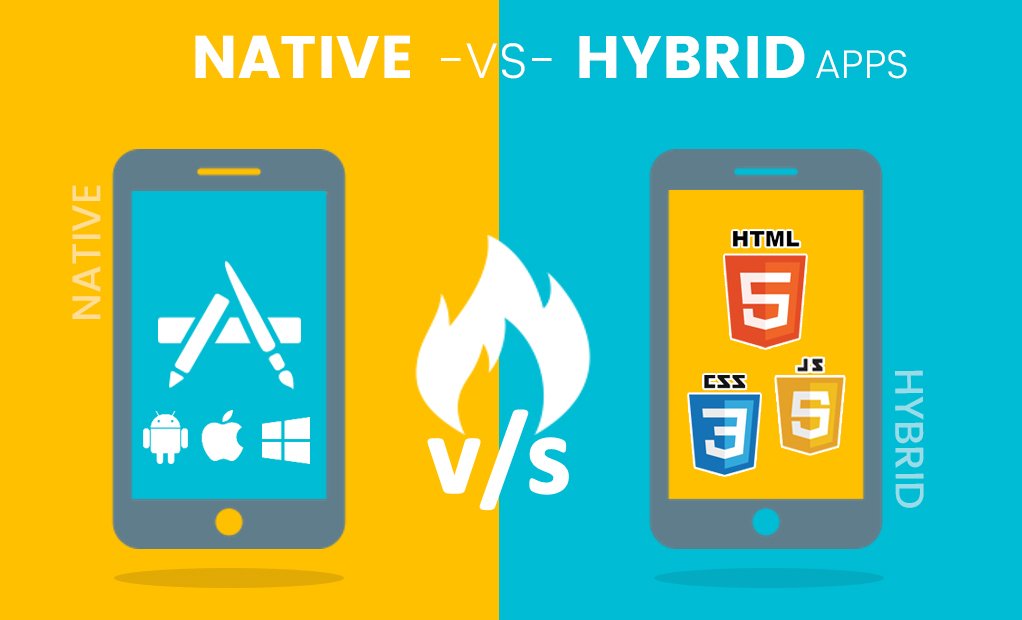 You might be thinking of developing a mobile application, but confused how to go about it or from where to start due to the various technologies available to develop apps? Also, which is the best for your business – a native app or a hybrid app? Let’s find out.

Your choice of a native or a hybrid app will depend on several contrasting factors including your budget, targeted audience and your deadline. The very moment you decide to invest in a mobile app, you immediately come across loads of terminology.

You need to know the difference between iOS and Android and the nature of native, hybrid and web apps. And very importantly, you also need to find out which app is the most suitable for you. So, in this article, we will go through all the differences between the two types of apps, understand which one to use and will make you aware of some of the benefits of each.

What is native mobile app?

A native mobile application is a smartphone program that has been created for use with a particular platform or device like for iOS, Android, Blackberry and so on. Native apps are encoded in a particular programming language such as Objective C for iOS and Java for Android operating systems. Native mobile apps are fast and more efficient in terms of performance. They also have access to the built-in features of the handset, like its camera, address book, GPS, accelerometer, compass and the list of contacts. Moreover, these apps are quite well supported by the platform owners along with specific libraries and support.

This kind of app is expensive to build because it is generally designed to run on a particular operating system or a specific device, the one based on either iOS or Android.

A large number of video games for mobile devices are native mobile apps, while examples of native apps include a majority of the well-known apps out there like the Facebook app, Twitter app and Waze are native.

What is a hybrid mobile app?

Hybrid apps are created for use on multiple platforms (Android, iPhone and Windows Phone). They are those web applications (or web pages) that you can run in a native browser. Examples of such apps include UIWebView in iOS and WebView in Android (not Safari or Chrome).

These apps are developed using HTML5, CSS and Javascript and then embedded in a native application using platforms like Cordova. Their development is faster and simpler. Also, such apps support multiple operating systems at minimal cost than developing multiple native apps and makes the apps more flexible to maintain. You can change platforms anytime you need.

Cordova is an open source tool that allows you to build your hybrid applications which can run on more than one platform just by one adding the right line of code. Also, Hybrid apps have access to phone hardware (native functions) such as the camera, microphone, location and Bluetooth. Cordova has a large repository of plugins that can ease your hybrid app development.

The major challenge with hybrid apps is that they still depend on the native browser, which simply means they are not as fast as native apps.

Advantages and disadvantages of native and hybrid apps

Both native and hybrid apps have ways to meet different needs and purpose of users and developers, but none of them can be said to be the perfect solution. These apps have their pros and cons — both for an app developer and as an end user. So, you have to decide which of suits you better or which app is ideal for your business needs.

Native apps are those apps that come with many functionalities offered by the mobile devices. For instance, camera, GPS, calendar and microphone. These apps help the users to build the experience which is fully enjoyable and provides a great exposure.

If you are looking for a high-speed app or game, then a native app should be your pick. Native apps get designed or developed for some specific operating systems, and they provide great performance.

Look and feel of native applications

The trendy look and feel of native applications are eye-catching and inspiring — allowing users to connect easily and quickly to the icons and button.

All the native apps follow the specific UX/UI standards for creating Android or iOS applications, which let the users easily understand the interface and navigation of the apps.

All the native apps on Android or iOS are only accessible through the app stores. Before all the apps get approved to be featured in the stores, they are fully tested and reviewed by the app store approval team. This provides a certificate of reliability and assurance.

Native apps are quite complex since they have a different codebase for each platform and to maintain them, it requires a lot of time and effort since separate teams have to work and support each version natively.

No guarantee that apps will get accepted

The principle advantage of hybrid apps arises from the fact that you are saving the stress of building multiple apps; you are building one app and tweaking it slightly. This makes the single app to be operable on both platforms and offers unified development. It allows the companies to save the amount of money in developing more than a single app for leading platforms. Developers can develop a single hybrid framework, and the common codebase can be used flawlessly for different platforms.

Only one codebase to deal with

Hybrid apps are easier to maintain as you have to manage only one codebase. While developing hybrid apps, you require fewer developers as compared to the native apps, which ensures smooth and efficient productivity.

Hybrid apps can be developed quickly, without much efforts in a short period. These apps also require less maintenance as compared to native apps and are flexible; they are easier to transform into another platform. By building one app on a platform, you can easily launch it on another.

Hybrid apps are known as cross-platform applications which are easy to scale on different platforms and different operating devices. It allows the development team to reuse the code without making many changes in the application.

One of the unique qualities of hybrid apps is that they use web technologies for app content. This makes the building of hybrid apps much easier. Web technology knowledge outweighs native app’s coding and provides more leverage for resources.

Visuals and interactive programs like games and 3D animation are present in hybrid apps, but these programs still work much better on full native apps. Businesses are not likely to have a more graphical and platform specific needs like games or animated apps, which is the main reason why hybrid apps are ideal for business professional services apps. Fortunately, more innovations are being introduced into hybrid apps on a daily basis, and they have been catching up with their native cousins.

Hybrid apps are a bit slower because they are based on the web technologies along with utilising mobile platforms such as Kendo, Onsen, Ionic and Cordova. All these platforms’ take considerable more time according to the application, which can result in loss of performance. It is also one of the biggest flaws because if the user will not get an impressive experience, then the likelihood of the application becoming popular goes down.

One of the serious disadvantages of a hybrid app is that they never offer a user the full native experience. In the app domain, the user very rarely gives the apps a fifth or sixth chance. So, the UX has to be up there with the best and flawless. The hybrid apps still have some way to go before they catch up with their native cousins on the UX front.

Which one should you choose?

To make the right choice, it is important to understand the differences between native and hybrid apps. Each has its own strengths and weaknesses, and your ultimate decision depends almost entirely on your business needs.

Usually, Hybrid apps attract more because of their easy availability approach, cost savings and their compatibility with more technologies and platforms. All these things are very appealing, but if we look at a longer term, then the hybrid apps can become a pain sometimes since they would need more time to fix the UX and performance issues which the users might report.

Whereas, if we look at the native apps, then these apps fully satisfy the users in terms of performance and with their seamless use of the platform’s built-in functions. These apps offer the best in class security for a mobile application, i.e., highly user interface design, best performance and access to the native APIs. However, you need a bigger investment in the beginning, but if we look at a long run, the investment helps you save your time and money in the future by offering a better user experience and following the platform and industry standards.

In the end, each organization has its own approach to designing an application. So it fully depends on you on which path to choose and follow.

This is a syndicated article from Open Source For You. See the original article here.

How to Manage Work from Home During the Coronavirus Outbreak ?