.NET Framework Programming – The Good and The Bad 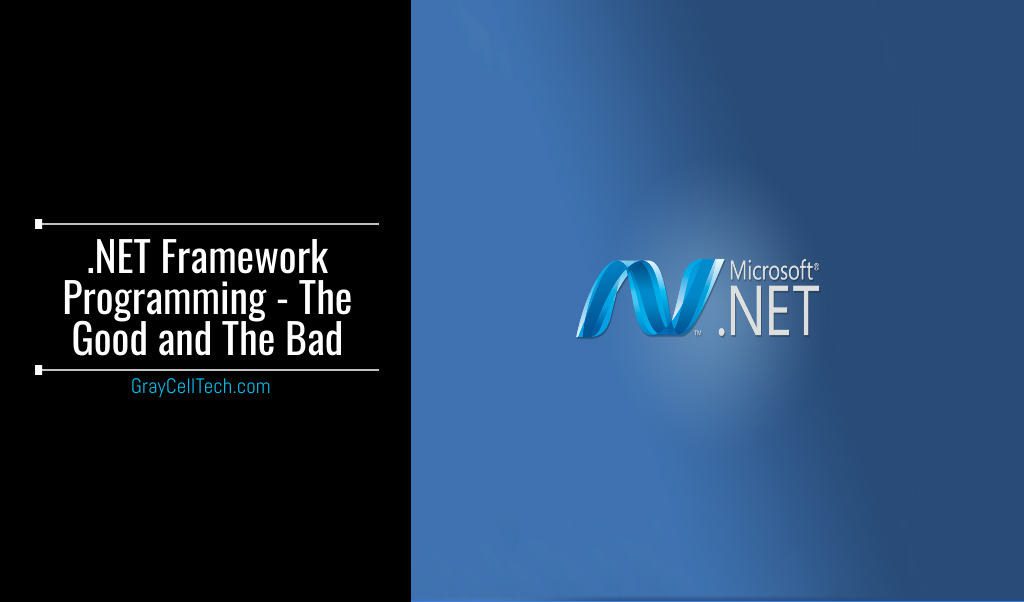 Microsoft developed a software development framework known as .NET. The idea was to create applications that can run on the Windows platform. The first version of this framework (or .NET framework 1.0) was released in 2002.

Let’s understand the good and the bad about the .NET framework programming.

.NET is object-oriented programming (OOP). The software is first split into smaller chunks or tasks. Then, developers work on each task one by one. Once a task is completed, they move on to the next task. When all individual tasks get finished, they are combined and managed more effectively.

.NET is reliable, simple to use, and can easily store data temporarily because its catching system is simple. It enables to customize the cache implementation so that developers can improve performance and scale as needed.

.NET has a Visual Studio IDE (Integrated Development Environment). It enables developers to build applications without much effort, and debug and publish these applications across a wide variety of platforms and operating systems.

.NET Core is a cross-platform .NET implementation that enables to run code on Windows, Linux, and macOS. Unlike the .NET Core, the original .NET framework is not completely open. The .NET Core ensures that a large community of engineers can continuously contribute to its development.

In case you have written your code in C#, Visual Basic, or F#, it will run on each of the compatible operating systems. It enables companies to reach a wide variety of platforms staying within the .NET ecosystem. Also, the cross-platform design makes sure that a pool of different engineers (or the entire .NET community) shares the experience.

The modular design of the .NET framework has helped in easy deployment and maintenance. Developers can take out applications, resolve the issues that require to be fixed or updated, and put them back together. They do not require to wade through oceans of scripts to find that one line due to which fault occurred.

When developers build an application using the .NET development tools, they do not require to redevelop the same apps for each new platform. All thanks to the introduction of the .NET Standard back in 2016. The .NET framework has a huge class library composed of the practical functions that developers could require. It helps in projects that require to render graphics and interact with databases. Moreover, it has made the manipulation of XML documents a lot easier.

.NET unites engineers from small to enterprise-grade companies; thus, it has a large community of developers that helps to resolve almost any issue. The .NET Core libraries, compiler, and runtime are available on GitHub and have multiple contributions as it is open-source.

“At the beginning of 2020, Statista revealed that .NET and .NET Core ranked second and third respectively as the most used frameworks by the software developers.”

The worst thing that happens during the coding process is when something goes wrong, and you notice too late or don’t even notice at all. This is where the automation monitoring feature of ASP.NET plays a crucial role as it helps you to notify when an infinite loop pops up, memory leaks or any other issue occurs.

Entity Framework makes the object-relational programming of .NET. The flexibility of this framework regarding new database designs is a concern as the framework may not support the emerging ones.

Since the .NET bundle is under Microsoft, any changes made by the company will inevitably impact projects done under the framework. It means developers will have less control.

Although open-source technologies, .NET app development is not at all cheap. Most of the money gets spent on Visual Studio IDE and other additional collaboration and quality assurance services offered by Microsoft (to simplify work). At present, Visual Studio costs $1999 per year for a new engineer and $799 for subscription renewal.

Although you can use the .NET Core on Mac and Linux machines, it is recommended to use Windows for .NET engineering as it comes with licensing costs.

Whenever Microsoft decides to launch a new feature or make new updates, documents and support can be lacking. It can lead to the stability issues of the development projects.

We have discussed the pros and cons of the .NET framework programming; however, if you are still confused about when to use this framework, you must consider the following points:

Usually, a software program should be scaled with the growing demands of the enterprise. To shape the growing wishes of the commercial enterprise, .NET provides the scalable surroundings and gives permission for redesigning ongoing programs.

.NET is a great choice if you want your app to run across different platforms as it covers most of the platforms. Also, you can reduce the development effort while expanding your laptop or mobile app to other operating systems. It can be used for precise engineering cases such as AR improvement.

Microsoft provides a wide set of tools to construct and cross-integrate products – both internal and public. It supports a strong organization mobility ecosystem.