SRE vs. DevOps:
Weighing the Differences 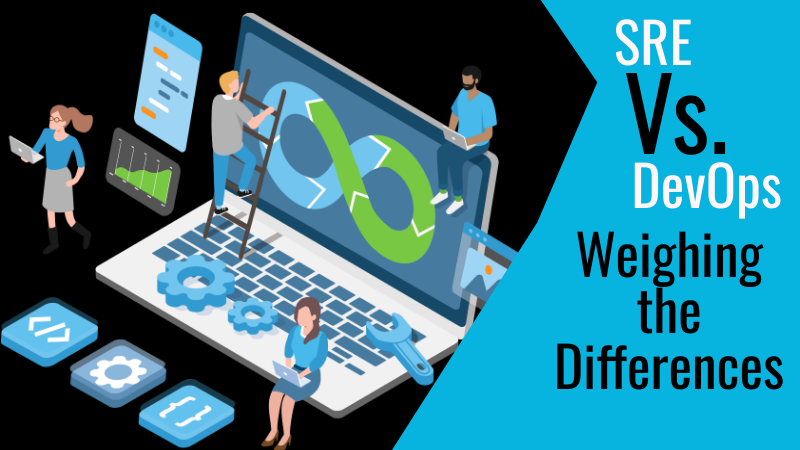 In this fast-paced world of IT, the usage of automation techniques is on the rise and is expected to rise in the foreseeable future. For an entrepreneur who wants to stay on top of the business world, it is necessary to meet the average consumer demands of speed, convenience, and reliability for a wonderful digital experience. This encouraged brands to adopt, faster, and more efficient software development and maintenance practices of DevOps and Site Reliability Engineering (SRE). These trending disciplines are accelerating the application delivery by bridging the gap between development and operations teams. It’s a bit difficult to differentiate both the methodologies as share similar core principles and objectives.

Let’s analyze: What DevOps and SRE are? How they relate? What are the differences? What can they do for enterprises? And more.

DevOps is a cross-department integration between Development/ Code creation and Operations departments. Earlier, the Dev teams use to write code and throw it over the wall for the Operations team to install and support. This leads to considerable dysfunction since the developers want the clients to use the latest code whereas the operations team favors as little changes as possible for a steady system. This introduced instability that affects the end-users and the company. DevOps eliminates this contention by embracing open communication and full transparency between the software development (“devs”) and operations (“ops”) teams.

The term DevOps was coined by Andrew Shafer and Patrick Debois back in 2008 though gained popularity recently as follows agile principles enabling continuous delivery with a frequent release rate. According to Marketsandmarkets, the DevOps revenue will grow to USD 10.31 Billion by 2023 at a CAGR of 24.7%. Nowadays about every company, from a startup to an enterprise, is hiring DevOps. A DevOps Engineer is an excellent coder as well as capable to handle all the Ops functions.

It was a little much to ask developers to understand the infrastructure, including how to deploy, configure, and monitor product service. Here, the role of a site reliability engineer chips in. An SRE focuses on the aspects of software engineering and applies that to resolve the issues of the IT operations. The main goal is to create an ultra-scalable and highly reliable production environment.

The idea of SRE was brought to the surface by Google’s Ben Treynor in 2003 while become prevalent in recent years. A Site Reliability Engineer analyzes the unexpected incidents to prevent future hazards and evaluates new possibilities while handling the operations, monitoring, and alerting.

Both the DevOps and SRE address organizational needs for production operation management but are significantly different. The differences are listed below:

Though SRE and DevOps are different yet have the same measures of success. The reason behind it is very simple. Both disciplines reach to a similar set of conclusions by eroding the business barriers to deliver better software faster. Because SRE gives different approaches to build and maintain the top pillars of the DevOps only. Let’s find the connection as follows:

All in all, DevOps and Site Reliability Engineering are not competing while complementing each other. SRE is efficacious to implement the DevOps paradigm. DevOps helps to deliver applications and improves products at a faster pace whereas SRE comes into play at the post-deployment stage. Experts are predicting that these will be imperative to drive operational efficiency and productivity in business processes by 2020.