What is Serverless Architecture? Why use it and its Advantages and Drawbacks 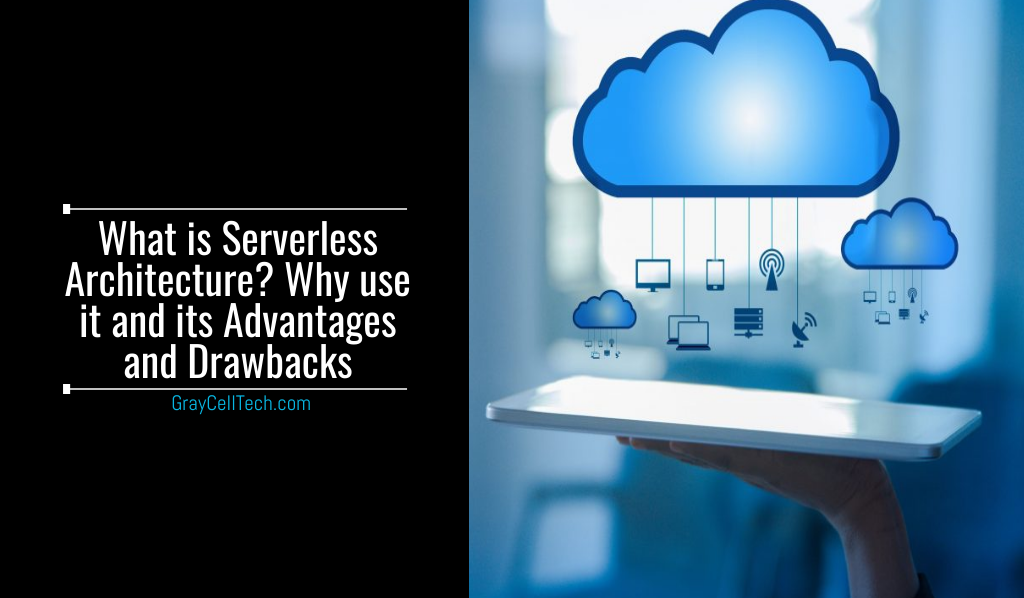 “More than half of the AWS users have adopted and are utilizing the serverless AWS Lambda – Function as a Service (FaaS).”

The term “Serverless” became popular since the time Amazon unleashed AWS Lambda, i.e., in 2014, and has witnessed a rapid growth in terms of reference and also used with vendors who are entering the market with their solutions.

In this blog post, we’ll understand what is serverless architecture, why you should use it, and what are its advantages and drawbacks.

Why Use Serverless Architecture?

Serverless computer services are small snippets of code for executing a single function. These services are executed on pre-existing servers that also run functions for several other customers. In a serverless architecture, there is no infrastructure to maintain (even virtually), since you are utilizing someone else’s computer to execute your serverless functions.

The cost of serverless architecture is less in comparison to other cloud services. A serverless model eliminates access authorization, security image processing, presence detection, and physical or virtual costs associated with a server operation. You only require to pay for what services you use. When your services are not in use, no cost is incurred. Moreover, the cost of serverless architecture does not include hardware costs.

When we look at the functions of Google Cloud, its automatic scaling capability is one of the top-selling features. Google shares this capability with Azure and AWS.

With serverless functions, you can greatly reduce the latency experienced by end-users. These functions do not operate from an origin server; thus, there is no single location where the end-users traffic needs to direct.

A serverless function can be run using any of a cloud provider’s data centers, i.e., whichever is the nearest server to a user, it will be the one that executes the function and reduces the response time significantly.

Things that you must take into account for building code that can run directly on a computer are all part of building a functional app, such as operating systems, hardware resources that need to perform certain tasks, dependencies, and other factors. However, serverless architecture functions do not require to take these factors into account. The code has to be supported by the cloud platform. Not only the serverless functions are easier to build, but they also require a lot less coding knowledge that opens up development to people who have lower skills.

Replicating the serverless environment is difficult to check how code will actually perform once deployed. Since developers do not have visibility into backend processes and the application is also divided into separate smaller functions, debugging is more complicated. GrayCell Technologies can help to reduce the friction in testing and debugging.

In case vendors run the entire backend, it may not be possible to completely vet the security. It can be a problem for applications that can handle personal or sensitive data.

Since organizations are not assigned their own discrete physical servers, serverless providers will often be running code from their customers on a single server at any specified time. Sharing machinery with other parties is a problem that is known as multitenancy that can affect application performance. If multitenant servers are not configured properly, it could result in data exposure. Multitenancy has powerful infrastructure as it has little to no impact on networks that sandbox functions properly.

This feature limits those applications which can run cost-effectively in a serverless architecture. Since a serverless provider charges for the time to run the code, it may cost more to run an application with long-running processes in a serverless infrastructure in comparison to a traditional one.

Since serverless code is not constantly running, it may require to boot up whenever used. The startup time may reduce the performance, but in case a piece of code is regularly used, the serverless provider will keep it ready to be activated. A request for this ready-to-go code is known as a warm start, and a request for code that has not been used in a while is known as a cold start.

If you build serverless functions on one platform, it becomes difficult to migrate to another platform. Code may not be re-written, APIs which exist on one platform may not exist on another, and additional resources will be required to shift from AWS to Google Cloud or Azure. Thus, to invest in a serverless platform, you need to make sure that the vendor you are considering has everything you need.

Serverless architecture is an innovative approach for consuming the resources of the cloud. It helps in deploying and writing an application that enables the developers to focus on code. This approach can decrease system complexity, operational costs, and time to market.

The third-party services (such as AWS Lambda) are leveraged by AWS to eliminate the need to set up and configure virtual machines, it also locks-in the application and its architecture to a specific service provider. In the future, more movement towards the unification of FaaS frameworks can be expected. It will help to eliminate vendor lock-in and allow us to run serverless applications on various cloud providers or even on-premises.