What Serverless Architecture Really Means, and Everything Else You Need To Know 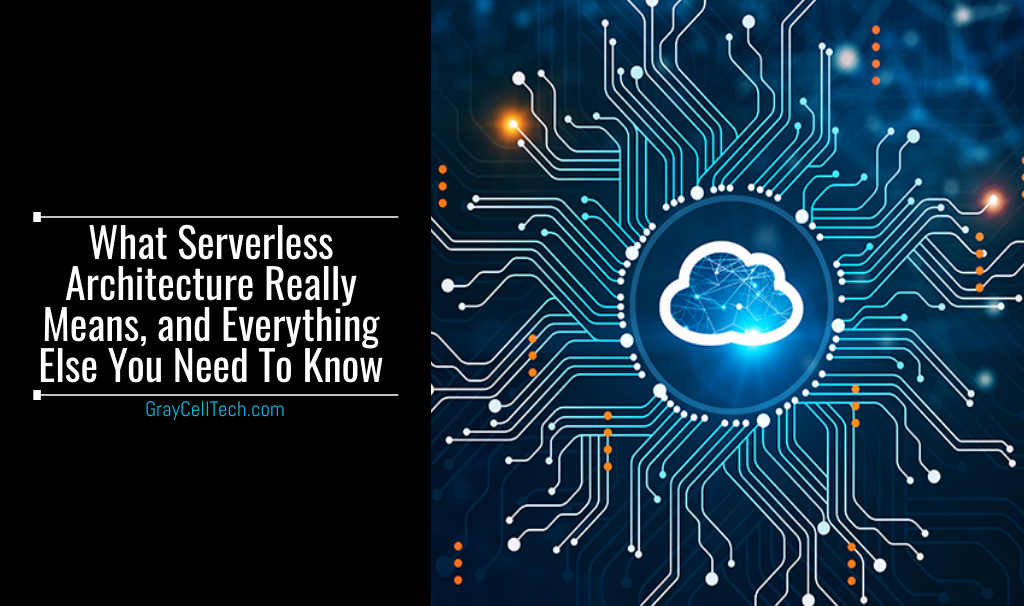 Applications are hosted by a third-party service in a software design pattern (known as serverless architecture) that does not require server software and hardware management by the developer.

Although cloud computing has advanced, businesses are still using servers. But, entrepreneurs will eventually shift from cloud apps to the serverless world because serverless architecture will bring dramatic changes in the creation and distribution of software and applications.

Serverless architecture helps developers focus more on their core products. Without serverless, developers would be worried about operating servers and managing them on the cloud or on-site. With serverless, developers will be able to focus on individual functions in their application code. Services like AWS Lambda and Microsoft Azure Functions will take care of the physical hardware, web server, and virtual machine operating system, and you would require to concentrate on your code.

Do You Require Serverless Architecture?

In case you want to host a small number of functions, you can consider switching to a serverless provider. If your application is more complex, serverless architecture can still be a good option as it offers numerous benefits, such as easier concurrency management at scale and optimizing resource usage. However, you would require to architect your application differently.

In case you have an existing application, this solution might not be the best. You can migrate smaller pieces of the application into serverless functions over time.

There are numerous serverless frameworks available in the market. You can choose any of the frameworks, such as AWS Lambda, Google Cloud Functions, and Iron.io.

AWS Lambda – the first serverless framework was launched in 2014. It is the most mature and developed framework that supports Node.js, Java, Python, and C# (.Net Core) and seamlessly integrates with many other AWS offerings.

Many cloud computing providers have their serverless offerings, such as Google Cloud Functions available in an alpha release, Microsoft Azure Functions, and OpenWhisk – an open-source serverless platform run by IBM.

There are some other serverless options, which include the following:

Iron.io – an open-source platform that can run on public, private, and hybrid clouds.

Eponymous serverless – a platform that runs on AWS Lambda and makes it easier to deploy and manage the multiple services that a serverless application may need (all in one codebase).

You only require to pay for the time that your app uses the server and need not pay for idle server time.

The server runs when your application requests it to execute certain tasks, and that’s when you need to pay for it. When these tasks do not run, the server stops running until another task needs to be completed. It is a very cost-efficient way to run an application and can save you a lot of money in the long-term.

Your application can automatically scale up to accommodate spikes in traffic and scale down when there are fewer concurrent users.

Let’s assume you built a ticketing platform for any event, such as a sports event. So, traffic will increase whenever you will release tickets for sports playoff games. However, the traffic volume will normalize when the event is not announced.

The serverless architecture can quickly scale up to handle the demand of rabid fans who are searching for tickets and scale down during the times of lower traffic. It will reduce the cost as you will pay for what you use.

It will increase your performance as your customers will never have to deal with a slow, unresponsive website or see app failure.

Businesses can utilize serverless architecture as most of the work will be done for you by your cloud computing provider, thus you will require to spend less time and money on managing servers . The IT team is less likely to manage the expansion and contraction of server capacity because the serverless architecture scales automatically to meet the demand.

In case something goes wrong and a server goes down (a rare case), your cloud computing provider will figure out and fix the problem rather than your IT team. Thus, you can concentrate on the more important things, such as the design and development of your app and running your business.

Serverless architecture may have a significant impact on the time taken by you to get your product to the market. Developers do not require to worry about deploying, managing, and scaling servers. They do not have to select, secure, or patch operating systems and can focus on building the best product. In this way, you can market your products much more quickly and better serve your customers.

A popular approach that helps to build modular software that is flexible, scalable, and easier to manage than its monolithic counterparts is known as microservices. A serverless architecture fits very well with microservices.

With this approach, developers can work autonomously and at the same time, can build smaller, more loosely coupled pieces of the whole software. These pieces are less dependent on each other, can be changed faster, and scaled independently.

However, each developer may require to spin up their own instance of infrastructure to build their portion of the product. The developer will need to worry about provisioning servers, scaling for high traffic, managing costs, and much more. It can result in a lot of overhead, high costs, and a ton of wasted time.

Serverless architecture addresses all such concerns.

Developers do not have to worry about provisioning and managing servers. The development team can build each piece of the product faster as each microservice can scale almost instantly.

Vendor control and vendor lock-in issues, security concerns, and multitenancy problems occur in a serverless architecture. Let’s assume you give up system control while implementing APIs; it can cause system downtime, functionality loss, forced API upgrades, and unexpected limits and cost changes.

For debugging and monitoring tools, developers depend on vendors.

Another problem that causes the flawed usage of serverless architecture is architectural complexity. To decide the size of the function, it takes quite some time to assess, implement, and perform a test.

The serverless architecture will create more standards and support more programming languages so that more developers can easily use the platform and become proficient with the technology. It will continue to address problems with latency and efficiency.

Therefore, it is evident that the future is bright for serverless architecture, and this approach will be around for a long time.

A Comprehensive Guide On JUnit 5 Extensions