Why Android Developers Should Pay Attention to Flutter in 2020? 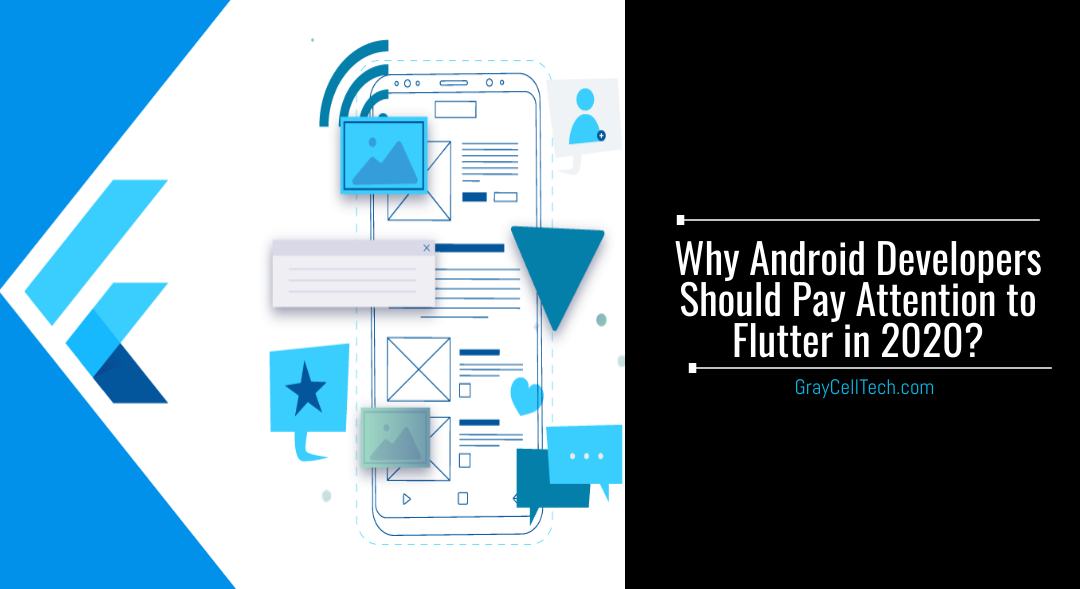 Native Android is known for many years due to its stability and good performance across all Android devices. However, at present, there is a need for a cross-platform app development solution because native Android has a huge amount of boilerplate code that restricts a developer’s creativity and innovation. Hence, Android developers must know about cross-platform solutions such as Flutter.

It is a free open-source versatile software development kit (SDK) that was created by Google. It utilizes the same source code to create Android and iOS applications. Flutter existed long before Google revealed Flutter’s release preview in 2018; however, it gained popularity later. Since Google has launched the first stable version of Flutter with lots of new features, major companies (such as Alibaba) started using it to increase their mobile phone users.

How Flutter is Different From Native Android App Development?

When compared to apps developed using cross-platform solutions, native apps (developed by Android Studio) have rich features and are more flexible. However, the app development methodology changed with the release of Flutter. What makes Flutter native and flexible?

There are different opinions and discussions about Flutter. It is said that Flutter will replace Java and Native app development very soon. Therefore, developers must know about Flutter.

Let’s take a look at various factors due to which Flutter has become a buzzword.

Let us now discuss how each factor helps to differentiate between Flutter and Native App Development.

Talking about the IDE (Integrated Development Environment), both Flutter and native Android applications can be developed using Android Studio. However, Flutter applications can also be built-in lightweight editors (such as Atom) or in an IDE (like IntelliJ Concept).

Native apps developed using Java or Kotlin run fast and smooth as all components designed are native. Flutter utilizes Dart language and hence, does not allow to connect with native modules through the bridge.

We can say that Flutter has everything that is required for the native app development.

Android Studio IDE has already installed all the SDK tools. However, you require emulators (Android Virtual Devices, AVD) to run these apps. Developers have to use Android Studio and its platform-tools to develop native apps. In case developers made any change in the app, they need to rebuild the app to see the changes in the emulator. The Gradle build is a slow app development process.

Flutter has a reload option for developers. Whenever a change is made in the app, it will reflect in the emulator instantly. With the increasing app size, developers need to follow new technologies to use this feature more effectively.

In the Android ecosystem, Gradle can handle various Java and Kotlin packages available in the market, easily and effectively. It can also handle the dependency management system of the native Android app. Whereas, Flutter has its own dependency system (known as Pub). Flutter applications have an inbuilt Pub Package manager that makes new dependencies; therefore, getting new dependencies according to the development becomes quite easy.

Since Dart is an uncommon programming language, it is not supported by many IDE and text editors; whereas, Java and Kotlin are much more friendly languages for development in Android Studio. However, the emergence of Dart language can help developers to learn new programming languages. Also, there is various community support for the native language.

Front-end developers devote most of their time in developing an interactive UI. UI is the most critical part of an app. To build UI, Google offers powerful and well-documented native UI components. For developing interactive UI, Android Studio supports interface builder.

Flutter UI is different as Flutter apps run on rendering engines and their framework. Flutter can develop complex UI with its widgets. Flutter has a collection of stateful and stateless widgets. Multiple widgets can be used to build complex UI that supports Android as well as iOS material components.

Developing and releasing native Android applications is a dynamic task beyond the IDE. Android Studio supports native Android applications in automation testing, automation development, and publishing. However, the web has not provided Android with a dedicated CI/CD interface. Thus, Android developers will have to focus on CI providers/CI platforms like Jenkins, Circle CI, etc.

Flutter offers a dynamic framework for testing that enables users to create tests at the functional and UI level. Flutter’s Widget feature enables users to test UI as fast as unit tests. Xcode UI tests are similar to Flutter integration tests as both go through the UI for certain operations. There is a separate package (known as Flutter Driver) to run these tests. Flutter integration tests run on a separate process, but you can also run them on emulators/simulators.

Although Flutter is packed with feature sets, it is not complete as few significant features are missing. For instance, Maps, OpenGL, accessibility support, and video support. Flutter lacks the required programming packages. It does not offer support for editing the form. When compared with native developers, the Flutter population is limited.

Flutter cannot be overlooked as it has become a ground-breaking system. Even if you do not like Flutter, you must test Flutter and Dart to realize its true potential as Flutter might impact the position of native mobile app developers in the future.