Zero Code Test Automation Platforms – Why are They Trending? Find Out Now! 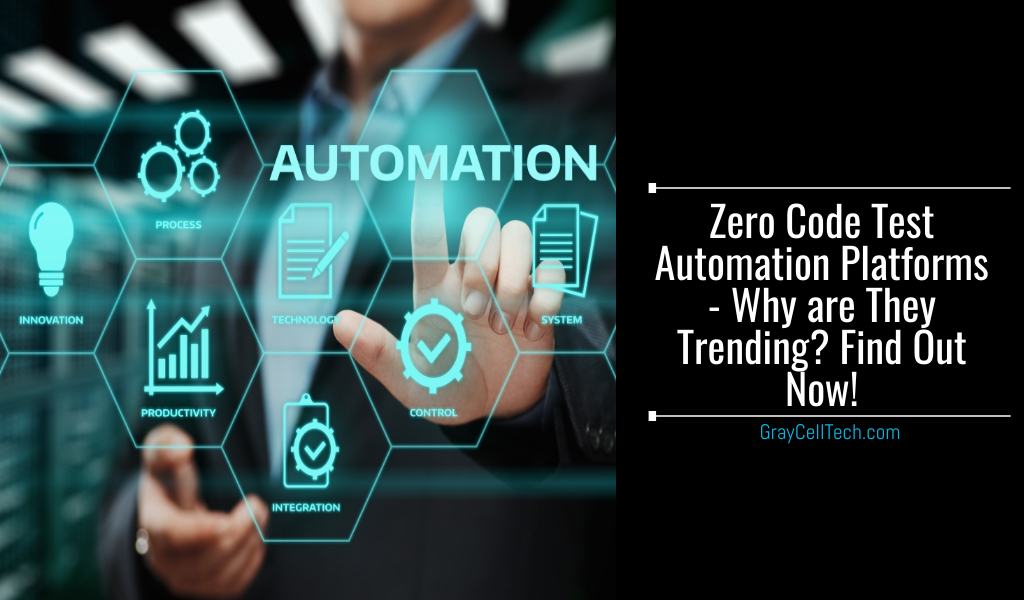 Zero Code Platforms – are trending! This set of powerful tools have become more popular because, with their help, one can now automate with little to no knowledge of programming! Thus, the technological world is beginning to see more software development and test automation developers. These tools are easy to learn, they enhance the speed of development, offer agility, and help derive the end product’s business value faster.

This article discusses the advantages of using zero code automation platforms. Apart from this, it also mentions some tips that QA team can refer to while choosing a zero-code test automation platform for the project. As a bonus, some powerful tools have been listed here as well!

How do the zero code platforms function?

For GUI test automation, without coding, the automation developer can build test scripts by mimicking the user scenario actions on the screen. Meanwhile, the tool records all of these actions associated with the test actions planned by the tester.

Under the hood, elements including the UI widgets, such as the text box, drop-down box, etc., are treated as UI objects by the tool. The object repository stores the UI objects. These objects can be explored and updated by the QA tester as there is a change in the UI. They also offer drag and drop features to create scripts for testing.

Likewise, several types of test development can be built using these platforms, including security, stress, load testing, and more!

There are several advantages to using zero code platforms. These benefits drive them to be popular in today’s world. They are AI and ML-enabled, thus making them powerful and enabling digital transformation. They are convenient to use and are therefore popular among both the novice and the expert in the test automation arena. And most importantly, these tools help ensure focus on the customer’s needs. Let us explore how!

Coded platforms involve time spent on programming aspects, coding guidelines, framework planning, and more.  However, from the codeless platform point of view, we shift away from the test’s programming aspects. Instead, QA engineers can focus on the product’s business logic and functional elements, which is very important from the clients’ perspective.

A focus shift from the coding aspects towards the business logic aspect helps uncover many critical defects early in the software development cycle. QA testers are able to focus on the test strategies instead of programming.

QA test automation developers can swiftly design tests using visual drag and drop and record-playback features. With this, It decreases the total effort to automate the whole test suite. More work gets done in less time.

In the codeless test automation frameworks, simple unit test steps become the test scripts’ building blocks at the core level. The concept is in contrast to the massive chunks of code in the case of code test platforms. It makes maintenance of the test suites easier as well.

In time, these tools can save time, money, and effort for the software development organization and the client.

Because these tools are more visual and intuitive to help design tests, they have become the perfect platform to encourage those new to the test automation field.

Most of these tools offer simple GUI to record and playback the tests, and feature drag and drop options to create tests. Such user-friendly tools encourage more novice testers, as well as business analysts, to enter into the field of test automation.

Due to the emergence of these platforms, those who had previously found coding to be overwhelming have joined the bandwagon to automate! This includes citizen developers into this world!

People used to find the coding platforms too daunting as it required them to learn programming languages. However, now with the help of these tools, they do not have to worry.

These tools have eventually addressed the technical skill gap by enabling more of their employees to automate.

When created, the scripts are nothing but a set of readable, simple test actions; those who have not personally automated the test scripts can easily comprehend the test script.

QA teams work closely with business analysts while designing tests that the business and clients value. Business analysts who do not know test automation or programming languages can easily read through and understand the test steps during this process. As a result, they don’t need to depend on QA testers to completely decipher the test scripts.

The visually designed and displayed test cases are easy to understand. Any modification can be done quickly by anyone in the team. There is no dependency on the test automation developer who developed it.

These tools power up the attitude of Agile and DevOps mainly because it speeds up the test development process, eventually helping to release the product quickly to the market.

Apart from this, they enable the interaction between the developers and the Ops team. It helps break the silos in the group by enhancing collaboration while using the tool’s visualization tools. Dependencies and gaps are transparent in the tool. Also, team members, from the QA testers to developers and business analysts, can pick, understand, and share the code.

These tools also integrate with CI/CD tools. DevOps tools ensure that they support these zero code platforms as well. In the Agile perspective, a high focus is on the backlog, and items get cleared from the list quicker than ever before because of the enhanced development speed.

These tools offer test coverage tracking. Using them, software teams can associate business rules with the test cases using the visual options. In case there are any coverage gaps, tests can be identified and built or built as per the scenario.

The tools provide pre-configured frameworks with even multi-objective tools successfully. Getting started up in test automation becomes a quick transition.

Tests in these types of tools are nothing but a group of the smallest units of test actions represented visually. The reusability of these units is straightforward. If tests are reusable, they save time for a project, and resources too.

Reusability improves the maintainability of code in the long run as well.

Here are some handy tips to help you choose from the many zero coding platforms available on the market:

Many of the zero and no-code platform tools have self-healing properties enabled by artificial intelligence. So, before you choose a tool, do explore this option’s availability! It is magical, and the QA team will love it!

This feature enables the tool’s ability to detect any changes required in the automated test whenever there are changes in the product to be tested. Additionally, it can fix the code itself without any manual intervention. This benefit indeed is a bonus in terms of the project’s maintenance aspects – it helps save time and resources.

Most of the tools come with cross-device, cross-platform support. It enhances the test coverage across several devices. Apart from this, they are cloud-deployed, offering many advantages.

Being cloud-enabled helps to keep up with the platform or device updates and upgrades. Such support also enables 24X7 availability. Scaling up is easy and cost-effective.

When tools offer seamless integration options to 3rd party tools, especially with external DevOps tools, Project Management tools, and test management tools, it helps the QA teams retain any existing toolset they depend upon. Additionally, it allows the team to build customized solutions based on their budget and business points of view.

There are several advanced modern-era test automation tools available on the market to explore. We’ve listed below some of the popular zero code platforms:

Leapwork automation tool works on the codeless test automation methodology powered by Selenium at its base. It requires that the automation developer not know any programming language in order to automate.

Codeless tests can be associated with both Web and Mobile based tests. Their easy to use interface helps build tests linked with Mobile app device testing using the Mobile Test Recorder. Web-based test development is using the Web Test Recorder.

Salesforce apps are known to see constant updates. These updates include keeping up with a business’s ever-changing requirements and ensuring these requirements are incorporated with speed. The tool is resilient in building tests and also seamlessly integrates with DevOps tools.

For those new to the test automation field, the Zero, Low code platforms are a great way to transition into the field of test automation. Many business analysts have started transitioning into automation testing due to the ease of doing so. DevOps and BizOps have become a practical reality when these tools are utilized in software development companies.

The number of organizations getting into the world of zero code or low code platforms increases by the day. The visual approach of test automation has enabled more test automation developers to join in. Test development speed is high, thanks to them, thus driving high and quick profits to organizations. Apart from this, scaling up with regards to the growing demands of the company is now swift. All of these positive aspects can enable a business to stay in sync with a fast-paced world.