CakePHP has been gaining widespread popularity among developers due to its seamless configuration. It is one of the most comprehensive PHP platform, which is highly organized with the perfect collection of elements. It is a cohesive framework that allows you to pull any utility classes into your own app, go at full speed using the full-stack framework or use custom router classes to create a micro-framework.

It allows the practice of creating codes that can be easily reused, so it is not required to create new codes from scratch all the time, thus saving effort and time while creating websites.

It is widely being used by many large companies as well as large website and some open-source projects are also powered by CakePHP. This brings a lot of interoperability between all these solutions.

As its name implies, it works on PHP which is the most widely used language for web development. It was brought into existence in 2005 and has quickly risen above the ranks of its competitors such as CodeIgniter, Symphony or Zend. CakePHP offers an extremely fast and flexible templating system. 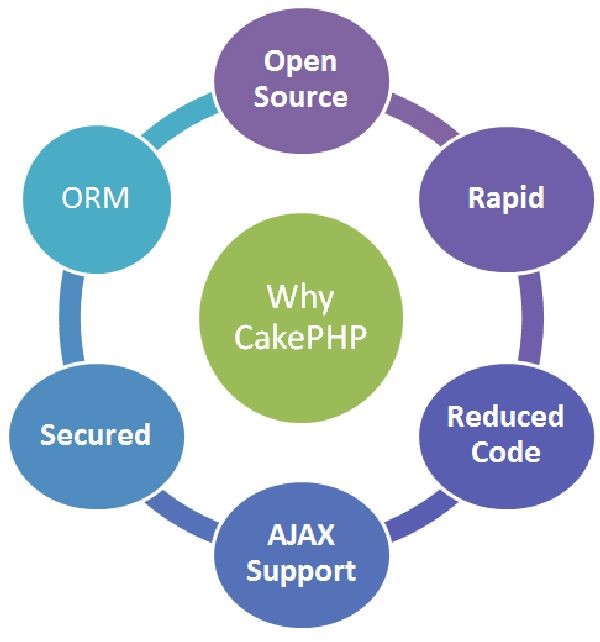 Why is CakePHP popular for Web Development?

It is basically a framework which enables web developers to create multi-featured and highly-specialized websites by using an easy procedure. Developers can create an effective, robust and affordable websites easily. Here are the few of its outstanding features, due to which CakePHP is worldwide popular in web development:

Most popular CakePHP based CMS

CakePHP is an open source PHP framework, that can help you create, manage, as well as publish content through CakePHP-based CMS. Following are some of the most popular CMS, which are built on the CakePHP framework:

With its introduction in place, let us now have a look at its advantages:

The first and foremost rule of making a commodity popular is the fact that it should be easily accessible and open to all. CakePHP wins this bet by making sure that it remains an open source web development program. With no licensed or recurring fees and no probability of even investing a penny in web development. As the name suggests, this platform supports PHP, which gives the web developers the freedom to create an amazing website.

CakePHP is superior in the sense that it saves web developers a lot of hassle. No system configuration is to be done before using this platform. What does this mean? This means one need not to invest time in configuring Linux-Apache-MySQL-PHP setup.

It does this on its own by auto-detecting all the settings that are to be configured. Additionally, Apache configuration is also not needed. It saves you further precious time by even taking charge of the validation features which are built-in. The developers can create different validation rules, this feature is efficient and very simple at the same time.

It eliminates developer efforts by eliminating XML and YAML files. So, there isn’t a single part of a code, where you need to specify the location of the library. The only thing you need to care about is the Database settings.

Object Relational Mapping is a technique through which data is converted between an incompatible system using an object-oriented programming language. CakePHP has an outstanding inbuilt ORM and is highly capable. This is why working with databases and CRUD operations is as easy as anything. Data is presented in the form of classes, which are used to define relations. Along with that, it is also possible to pre-define callbacks.

At the moment, there are two versions – version 2 and 3. CakePHP version 3 supports a PHP package manager, whereas the former version does not.

CakePHP allows you to create reusable code parts which can be reused for more than a single project. Instead of extending its own libraries, functionality can be given to components, helpers, plug-ins, and behaviors. The cakeforge site has a lot of plugin helpers and components, this saves your effort of writing everything on your own.

CRUD is an acronym for “create, read, update and delete”. These are some of the primary actions in a web application. Various entities can easily be created, viewed, read, updated and deleted. This allows you to view a demo of your application. This allows all models and controllers to be modified for the specific necessities of the application. It also allows an easy management of data in the web development process.

This is extremely helpful, because with a single line of code you can see preliminary view of your application.

CakePHP boasts of the ability to test all fragile and critical points of your application. They range from core tests to custom-made tests, which you can make according to your own requirements. This becomes really useful when you build a large application, where its performance should be checked at each step. It is most preferred by the developers because of the ease of debugging and testing any application, once it is developed. This helps in instant identification of errors and correcting them.

It provides you with the ability to check the critical points in your application.

For most people, security is the biggest problem faced in any situation and a secure environment earns more points than any other trait.  Its core security and CRUD features allow securing the user submission process in less time. CakePHP has a built-in security and authentication. It protects the security of your application much more than any other framework. It has many built-in tools for CSRF protection, input validation, SQL injection prevention, form tampering protection, and XSS prevention.

CakePHP inheritance is amazingly easy and understandable. It has two main folders in each of its projects: the core library and the second being the application specific one. All application specific controllers are extended app controller class which is empty but can easily be extended by some smart measures such as pre-defining core functions. The same applies to models as well.

Being based on the MVC, CakePHP allows saving any query to the database. If any alterations are needed in the database, then CakePHP allows the web developers to insert, delete and change the model according to their custom requirement. This helps them to separate the data presentation layer from the business layer. This model helps to collaborate the data with the logic and save it in the database in a presentable way to the end-user. Model option supports data management and it is supported by Controller option.

Though you might not see much of the usage of MVC patterns for small-scale websites when developing large scale websites, MVC architecture is a blessing.

10. Friendly license and easily extend with components and plug-ins

Acquiring an MIT license helps CakePHP become even more vast and perfect for building applications for commercial use. With its improved bootstrapping process, it allows even more developer control and better performance. Apart from that, it allows developers to create parts of reusable code which is highly useful for more than one project. You can easily modularize your projects by placing special functionality in components, behaviors, helpers and a combination of Models, Views, and Controllers – encapsulated as plug-ins. There are a number of plug-ins already available for use on CakeForge website, so you need not to worry about writing everything from the Scratch.

CakePHP has proven to be very efficient and useful tool and we can say that it has become a favorite among developers. With its amazing features for translating, caching, validating and authenticating, it is the best choice for developing a perfect content management system.

8 Tips to Increase Your eCommerce Sales