Why use TypeScript in 2019 in Web Application 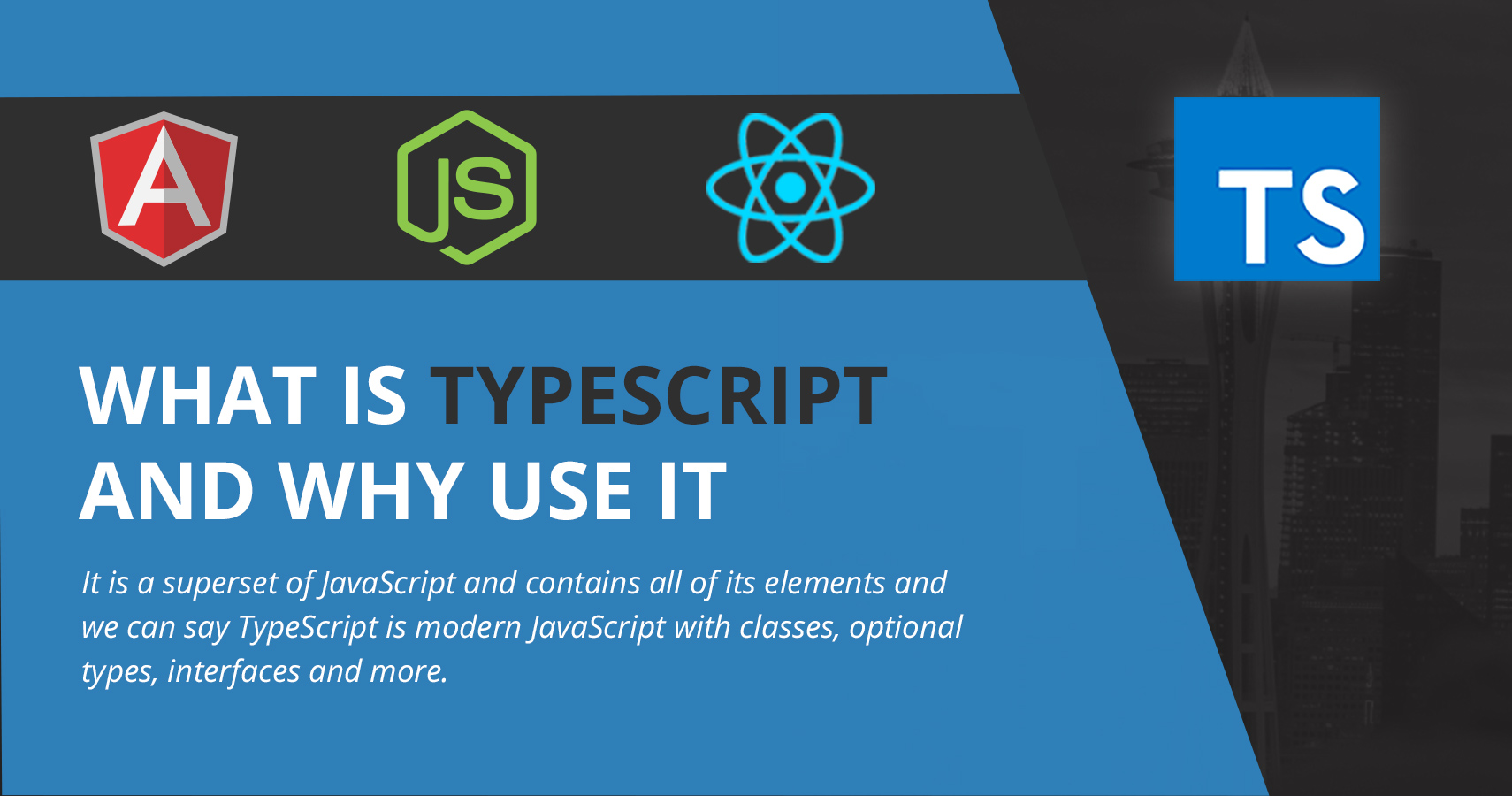 TypeScript is an object-oriented programming language developed and maintained by Microsoft Corporation. It is a superset of JavaScript and contains all of its elements and we can say that TypeScript is modern JavaScript with classes, optional types, interfaces, and more.

TypeScript totally follows the OOPS concept and with the help of TSC (TypeScript Compiler), we can convert Typescript code (.ts file) to JavaScript (.js file)

Typescript is a superset of JavaScript.

A brief history of TypeScript

In 2010 Anders Hejlsberg (the founder of Typescript) started working on Typescript at Microsoft and in 2012 the first version of Typescript was released to the public (Typescript 0.8). Although the release of Typescript was praised by many people around the world, still due to lack of support in major IDEs, it was not majorly adopted by the JavaScript community.

The first version of Typescript (Typescript 0.8) was released to the public in October 2012.

Why should we use TypeScript?

Differences between TypeScript and JavaScript

TypeScript uses concepts such as types and interfaces to describe data being used. This allows developers to rapidly detect errors.

Google has also announced they would replace AtScript with TypeScript. Angular 2 is built on TypeScript as well.

“We love TypeScript for many things… With TypeScript, several of our team members have said things like ‘I now actually understand most of our own code!’ because they can easily traverse it and understand relationships much better. And we’ve found several bugs via TypeScript’s checks.”

“One of Ionic’s main goals is to make app development as quick and easy as possible, and the tooling support TypeScript gives us with autocompletion, type checking, and source documentation really align with that.”

“TypeScript is a smart choice when writing a modern web- or JavaScript-based application.TypeScript’s carefully considered language features and functionality, and its consistently improving tools, result in terrifically productive development experience.”

“TypeScript helped us to reuse the team’s knowledge and to keep the same team velocity by providing the same excellent developer experience as C# … A huge improvement over plain JavaScript.”

Talk to our TypeScript expert
to put your ideas into execution

Typescript includes a very good set of Object-Oriented Programming (OOP) features, that are good to maintain robust and clean code; this improves the code quality and maintainability. These OOP features make the TypeScript code very clean and organized.

let customerId =5;// Id returned after save

Typescript supports interfaces, generics, Inheritance, and method access modifiers. Interfaces are a good way of specifying a contract. Generics helps to provide compile-time checking, inheritance enables new objects to take on the properties of existing objects and Access modifiers control the accessibility of the members of a class. TypeScript has two access modifiers – public and private. By default, the members are public but you can explicitly add a public or private modifier to them.

Showing one public and one private variable

TypeScript does not allow intermixing of values with different datatypes. When such restrictions are violated, errors are thrown. Therefore, you have to define type when declaring variables and you cannot assign other values other than the type defined which is very possible in JavaScript.

If we do not follow the proper syntax and semantics of any programming language , then compile time errors are thrown by the compiler. They will not let your program to execute a single line until, you remove all the syntax errors or until you debug the compile time errors. It is the same case with TypeScript as well.

Less Code as compared to JavaScript

Typescript is a wrapper around JavaScript so helper classes are available that reduce the code. The code in Typescript is easier to understand.

Interfaces, classes, etc. provide readability to the code. As the code is written in classes and Interfaces, it is more meaningful and easy to read and understand.

Typescript is compatible with JavaScript libraries like underscores, Lodash, etc. They have many inbuilt and easy to use functions that make development faster.

Provide a “compiler” that can convert code to JavaScript-equivalent code

As your TypeScript codebase grows, it becomes important to organize classes and interfaces for better maintainability. TypeScript modules allow you to do just that. A module is a container for your code that helps you organize your code in a neat way. Conceptually you may find them similar to .NET namespaces.

Typescript is a superset of ES6, so all features of ES6 are there plus some additional features like it supports Arrow Function commonly called lambda function. ES6 has introduced a slightly different syntax to define anonymous functions called the fat arrow syntax.

Example with the following snippet

TypeScript has become more and more popular over the last few years. Maybe the defining moment of TypeScript popularity was the time when Angular 2 officially switched to TypeScript, which was a win-win situation.

TypeScript allows you to define overloaded functions. This way you can invoke different implementations of a function depending on the parameter. Remember, however, that TypeScript function overloading is a bit odd and requires type checking during the implementation. This limitation is due to the fact that TypeScript code finally gets compiled into plain JavaScript and JavaScript doesn’t support the concept of function overloading in its true sense.

It is easy to debug the code written with TypeScript.

TypeScript is portable across browsers, devices, and operating systems. It can run on any environment that JavaScript runs on. Unlike its counterparts, TypeScript does not need a dedicated VM or a specific runtime environment to execute.

We recommend Typescript for any large/medium projects because of its language features.

At GrayCell, we are using TypeScript extensively for some of our projects. If you have any questions about Typescript, drop a mail to us, and we will get in touch with you.